8 years after the shutting down of multiple businesses involved in the notorious Club Class scamming of thousands of timeshare owners, it has been confirmed that the victims will not receive any compensation, and many are demanding justice

Grant Thornton, the liquidators of the seven businesses collectively known as the ‘Club Class companies’ have confirmed that the winding up process has been completed and they are finally being dissolved.  It is also confirmed that the many  Club Class timeshare victims, who paid thousands each, will not receive a penny in compensation.

The seven businesses were closed down in 2012 following actions by UK authorities after numerous complaints by consumers. The UK Insolvency Service subsequently provided details of how timeshare owners were lured to meetings and promised disposal of their existing timeshares – and enrolment in a new, alternative holiday product – but the timeshare disposals didn’t happen and the ‘holiday clubs’ and offers were bogus.

No other actions and the scams continued

Although the authorities shut down these businesses and were unequivocal in their condemnation of the fraudulent behaviour that took place as part of the Club Class scams, there were no arrests and not even banning orders against the directors.

Club Class scam victims were in fact often harassed by connected businesses, who tried to bully the affected consumers into paying further fees. ITRA, one of the businesses that was named by the Insolvency Service actually continued to trade until last year, when it too was wound up in the High Court for failing to pay refunds as ordered by the courts after not providing promised timeshare exit and claims services.

Other connected businesses have been involved in demanding fees for ‘Club Class membership’ years after the UK actions took place. One such business is ‘Leisure Alliance’. Another is called ‘Gr8stays’ and is still trading. In addition, Gr8stays, along with what was a connected FCA regulated business based in Spain – Legal Representatives & Claims SL – trading as Leisure Claims, actually approached Club Class scam victims, stating they could help get monies back – for a fee.

And there have been many other associated scams often known as ‘recovery fraud’ where Club Class victims are fraudulently promised money back. One such business, Rest Assured Property Services Limited, was also closed down by UK authorities after scamming nearly a quarter of a million pounds from already hard-hit victims.

The businesses and people involved

In terms of identifiable people, Andrew Charles Cooper was a director of the two UK registered Club Class companies.  A Dennis Gilson acted as a representative for the Seychelles registered companies.

ITRA was registered in the Seychelles too. Andrew Cooper was described as a ‘consultant for ITRA. Cooper named Peter Utal (now deceased) as being the controller of ITRA.  Utal who, by his own admission had previous criminal convictions, had been a ‘director ’of Club Class Corporation plc.

Cooper is currently a director of European Consumer Claims Ltd., a UK registered business that is a part of a network of businesses using the brand ‘ECC’. 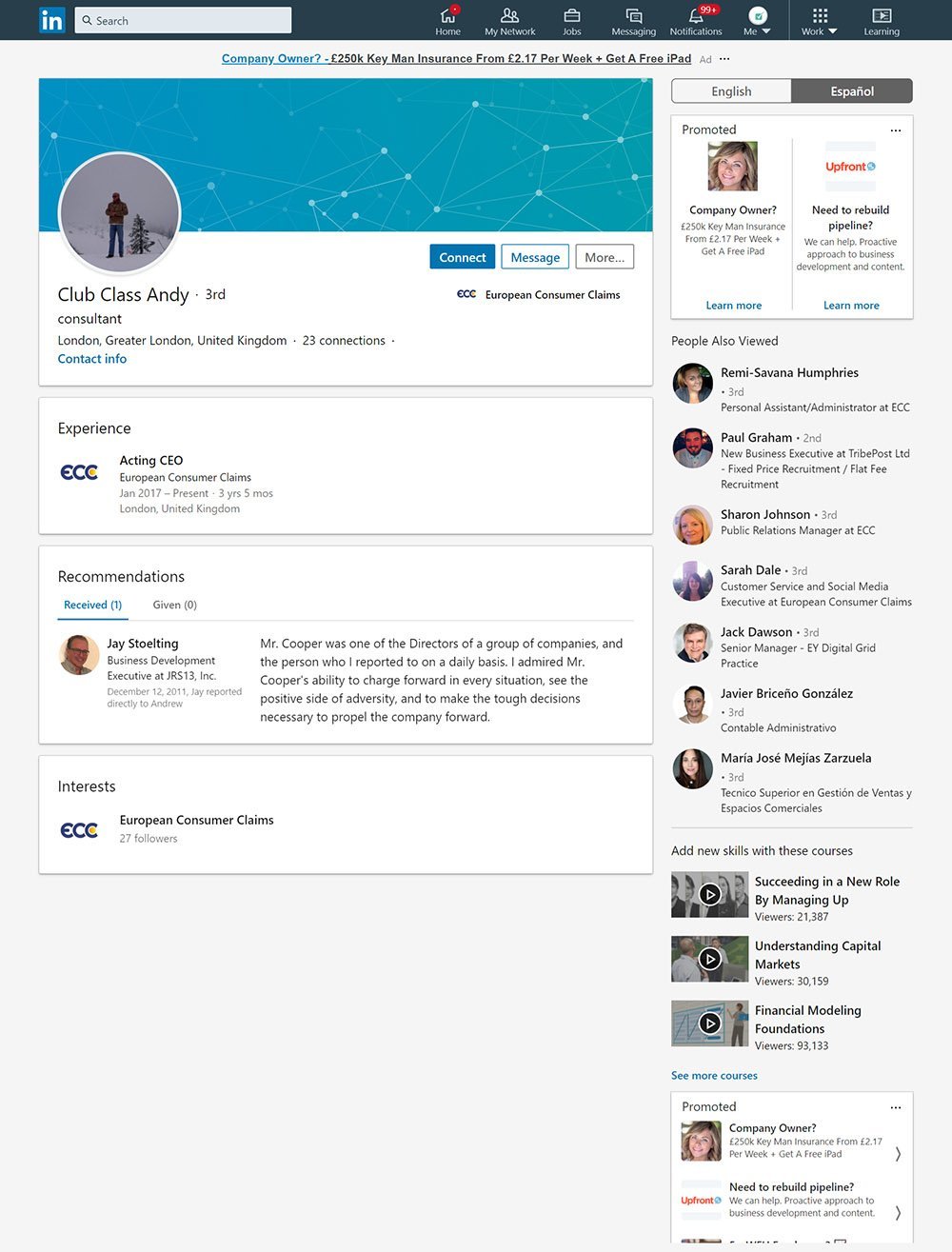 ECC contracts state their services are provided by a US registered company – European Consumer Claims LLC, which also does not disclose ownership details. ECC previously shared offices and used the same personnel as ITRA.

Dennis Gilson was given as the contact person in the FCA registration for connected Spanish law firm Maxima 1 Legal – trading as M1 Legal, which has shared an address with a number of connected businesses, including the Spanish arm of ECC and Gr8Stays.

A number of Spanish registered arms of the various Club Class, ITRA and ECC businesses have had a Fernando Sansegundo as a director, including Legal Representatives & Claims (Leisure Claims) and he is also a director of Maxima 1 Legal/M1 Legal. Other Spanish connected businesses have members of the Utal and Gilson families as directors – Victor Utal, Ricky (Utal) Mitchell and Justin Gilson among them.

Millions have been lost by consumers and many are still seeking justice. The liquidators of the Club Class companies say that they do not have the resources or remit to take further actions themselves and their role is at an end. There is an ongoing insolvency process in the case of ITRA and an investigation into the circumstances is taking place.

But the victims of the Club Class scam businesses are not all taking their losses lying down. Some are determined that more questions will be asked, and potential actions taken over who was responsible for their losses. They are starting to band together to form a victims’ support group to lobby for a full investigation.  Several have reached out to KwikChex, which has agreed to assist and will consult with regulatory and legal experts on their behalf.

If you are a consumer that has been affected by the above and wish to join the victims support group, please use the contact form on the following link, quoting Club Class/ITRA Victims Support.